It’s not exactly breaking news that Claremont is a nice place to live, but now it’s official: Sunset magazine says so.

Selecting the best places in the West to live, Sunset’s February issue gives Claremont the nod as “Best Suburb.” A four-page spread praises all the usual stuff — trees, colleges, small-town character — and presents a dozen photos of such sites as the Village, the Rancho Santa Ana Botanic Garden, the Packing House and the Folk Music Center.

As a loyal Claremonter, it’s my duty to chase people away.

Even the falafels are better in Claremont. Photo by David Allen 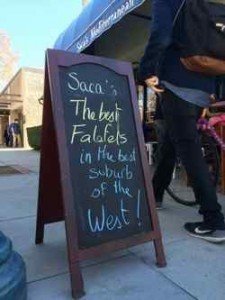